Input uncertainty, e.g., noise on the on-board camera and inertial measurement unit, in vision-based control of unmanned aerial vehicles (UAVs) is an inevitable problem. In order to handle input uncertainties as well as further analyze the interaction between the input and the antecedent fuzzy sets (FSs) of nonsingleton fuzzy logic controllers (NSFLCs), an input uncertainty sensitivity enhanced NSFLC has been developed in robot operating system using the C++ programming language. Based on recent advances in nonsingleton inference, the centroid of the intersection of the input and antecedent FSs (Cen-NSFLC) is utilized to calculate the firing strength of each rule instead of the maximum of the intersection used in traditional NSFLC (Tra-NSFLC). An 8-shaped trajectory, consisting of straight and curved lines, is used for the real-time validation of the proposed controllers for a trajectory following problem. An accurate monocular keyframe-based visual-inertial simultaneous localization and mapping (SLAM) approach is used to estimate the position of the quadrotor UAV in GPS-denied unknown environments. The performance of the Cen-NSFLC is compared with a conventional proportional-integral derivative (PID) controller, a singleton FLC and a Tra-NSFLC. All controllers are evaluated for different flight speeds, thus introducing different levels of uncertainty into the control problem. Visual-inertial SLAM-based real-time quadrotor UAV flight tests demonstrate that not only does the Cen-NSFLC achieve the best control performance among the four controllers, but it also shows better control performance when compared to their singleton counterparts. Considering the bias in the use of model-based controllers, e.g., PID, for the control of UAVs, this paper advocates an alternative method, namely Cen-NSFLCs, in uncertain working environments.

Fig. 1 The closed-loop control structure for the long-term navigation of the quadrotor UAV in real-time application. 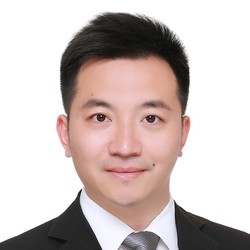